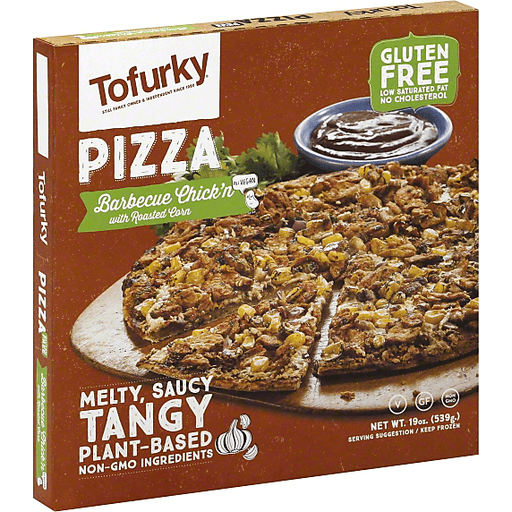 Melty, saucy tangy plant-based non-GMO ingredients. Still family owned & independent since 1980. Gluten free. Low saturated fat. No cholesterol. All vegan. Vegan. Non GMO. Barbecue chick'n with fresh veggies. Barbecue on a Pie! You're lucky you weren't born in the dark ages before the invention of BBQ chick'n pizza. Just think of all the cavemen who never got the chance to try a tangy, saucy pie, layered with silky vegan cheese, bright veggies and chunks of savory chick'n. Those poor cavemen. Good for you. Good for animals. Good for the environment. We support many causes to raise awareness for people, animals and our planet. 15 pounds of grain is enough to make 45 plant-based meals or one pound of beef. A pound of soybeans takes 63% less water for food production than a pound of pork. The Friendliest Food on the Plate: Good food is kind to people, animals, the environment, and especially tastebuds. That's exactly the kind of food we've been making at Tofurky for more than 35 years. Tofurky.com. Pinterest. Facebook. Twitter. Instagram. 100% recycled paperboard. This packaging was made with recycled materials and low VOC inks. Recycle it. The friendliest food on the plate. Made in Oregon.